WSJ Ask an Expert: Are Multiple Currencies Muddying Your Finances?

The Wall Street Journal invited Creveling & Creveling to be part of a panel of experts for personal finance on its WSJ Expat site. The following article originally appeared on the WSJ site and has been shared with permission:

Managing your money is hard enough when you're not constantly recalculating exchange rates. Chad and Peggy Creveling of Creveling & Creveling Private Wealth Advisory offer some strategies in this latest "Ask an Expert" edition.

Q: I'm a U.S. citizen, my wife is Australian, and our salaries are paid in Singapore dollars. We hope to split our retirement between the U.S. and another country such as New Zealand or Thailand. Given the fluctuations in exchange rates, how best can we manage our multiple currency finances and plan for our retirement?

A: As an expat grappling with multiple currency issues, you're in good company. The 2015 HSBC expat survey revealed that nearly 75% of respondents find at least one aspect of managing finances to be a challenge, with one of the top issues being dealing with currency fluctuations. Given the volatility in the currency markets in recent times this is no surprise. As shown in the table below, nearly all currencies have tumbled against the USD in the past 12 months. Diverging growth trajectories and monetary policies throughout the global economy will likely keep volatility high. 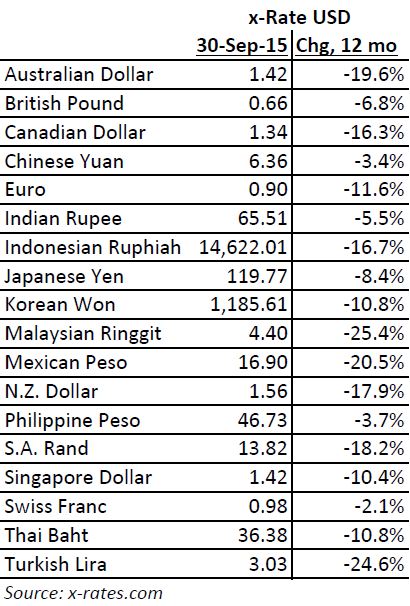 Expats by virtue of their lifestyle are typically exposed to multiple currency regimes due to mismatches in home currency, salaries, resident currency and assets held in various currency jurisdictions. Rapid movements in the currency markets can play havoc with expat net worth and cash flow, and can lead to a permanent destruction in wealth if not handled carefully. Unfortunately, it is very difficult for the typical expat to hedge currency risk with financial instruments particularly for those operating in the emerging markets. Some strategic thinking and careful management, however, can go a long way in managing currency risk for many expats.

By virtue of their lifestyles, expats are exposed to major currency risk. Many, however, really don't think about their exposure until it is too late. It would be nice if there were simple, cost effective ways to hedge currency risk, but unfortunately there are not good solutions available for individual expats, particularly those living and working in emerging markets. While currency risk cannot be totally eliminated for many expats, careful planning can mitigate the exposure and the fallout if things get volatile.