You have to take more risk to get a higher return on your investment, or so the saying goes. The saying has its roots in the basic principles of modern portfolio theory and refers to the idea that investors should be willing to accept more short-term market volatility (risk) in order to receive a chance at a higher long-term investment return. Conversely, investors should accept lower long-term expected returns on their investments if they’re not willing to accept much volatility. How well does this theory work in practice? In what instances might taking on more risk not necessarily improve your chance at a greater return?

In answering these questions, a key factor to consider is the time horizon of your investment, or length of time the investment is meant to last. Simply put, the longer your time horizon, the less volatile the range of returns of an investment, as long stretches of high returns tend to offset periods of low returns. The balancing of the highs and lows over time results in a convergence toward the average. Therefore, having a long time horizon for a high-risk portfolio (high short-term volatility) can help lower the possibility of receiving a poor return by decreasing its volatility over the total holding period.

In fact, most investors know that it makes little sense to invest in a risky asset (like an all-stock portfolio) if they plan to spend the underlying funds in the next year or two. With such a short time horizon they would run a significant chance of receiving a negative return. But while most investors agree that two years is too short, they may not realize just how long of a time horizon may be needed to make it likely that taking on a significant amount of risk will pay off. The following two examples look at the potential payoffs of high- and moderate-risk investments for a very long investment (30 years), as well as for a shorter-term investment (8 years). The results may surprise you.

To illustrate when the theory that higher risk equals higher returns can hold true, consider the following two globally diversified investment portfolios. Return is defined as the average nominal investment return that might be earned per year in U.S. dollars over the long term. Risk is defined in terms of the standard deviation of the annual returns. In other words, in two out of three years, each portfolio's return might be expected to fall within a range of the average nominal return, plus or minus the standard deviation. (In one of three years the portfolio's return could be expected to fall outside of the standard deviation.)

Source: MGP and Ibbotson. Nominal return is the average annual return of the portfolio between 1972–2020, as measured in USD, excluding taxes and portfolio fees. Real return is the nominal return less average USD inflation of 3.85% per year during the period. Risk is defined as one standard deviation—the nominal portfolio return could be expected to fall within the stated range in two of every three years.

In the figures shown above, the high-risk (greater proportion of equity) portfolio's long-term average annual return is greater than the moderate-risk (equal proportions of fixed income and equity) portfolio's long-term average annual return. This is especially the case when inflation is taken out of the equation—the high-risk portfolio's real rate of return is nearly 30% greater than the moderate-risk portfolio's expected return. However, it's important to keep in mind that to have a chance at receiving the higher average return, the investor would have had to remain fully invested for the nearly 50 years (1972-2020) and to have put up with much greater volatility, as shown in the higher annual risk/standard deviation figure.

The figures above use average returns, but how would your money have fared in USD terms had you actually invested for a long period? Results support the theory—if you had invested $100,000 in the high-risk (95% equity) portfolio for the last 30 years (between 1991–2020) and rebalanced annually, you would have ended up with substantially more at the end of the investment period (over $1.6 million) than would have someone who had invested in the moderate-risk portfolio (roughly $1 million). But as also might be expected, you would have had to put up with a lot of more volatility in the high-risk portfolio, including suffering significant drops in value between 2000 and 2002 and in 2008. 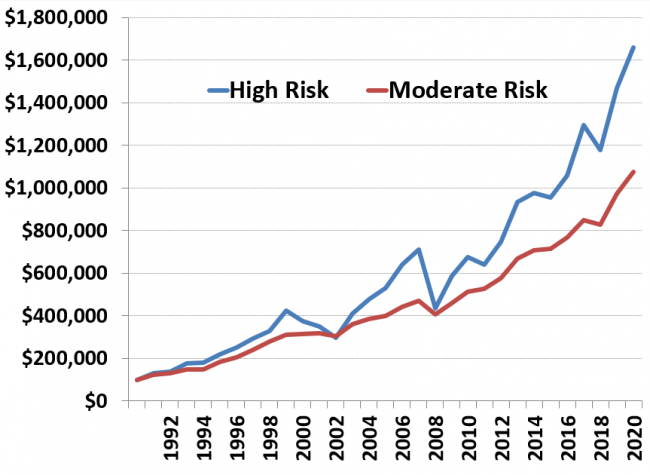 Source: MGP and Ibbotson and C&C estimates. Does not factor in taxes or portfolio costs.

The above results are probably very much in line with what most of us have come to expect when we talk about the relationship between investment risk and return. In other words, if you are willing to put up with more risk, you get a chance to achieve a greater return.

But what happens if we change the time frame? For instance, the example above assumes a relatively long investment period (30 years) and does not assume cash flow in or out of the portfolio. Despite good intentions, rarely in real life do we plunk down a sum of cash for a fixed lump-sum payout 30 years in the future. Rather, we may accumulate savings over time for a goal that will require those savings to be distributed over a number of years. The next example looks at a more likely scenario.

Consider instead the following example, in which John and Sue, an expat couple, are saving and investing for their 14-year-old son Blake to attend four years of college beginning 4 years from now. The college costs $45,000 per year in current dollars with a cost increase of 6% a year. Meanwhile, John and Sue are able to set aside $200,000 in a lump sum investment to fund Blake's future college expenses.

How much risk should John and Sue take in investing their savings? While they estimate the current cost would be $180,000, they expect that the total bill for college could be $245,693, after considering inflation. Seeing as they have $200,000 to invest and the time horizon for the investment will be a total of 8 years, at first it might seem to make sense to invest in the high-risk/high-return portfolio shown in the above example in order to have the greatest chance of paying for Blake's college expenses.

However, and perhaps counterintuitively, in this case taking less risk may actually give them a better chance of producing a good result. Because of the shorter time horizon, the chance of getting a better return, or even meeting their goal of funding college, is diminished. Eight years may simply not be enough time to make up for any periods of low returns that might occur during their investment horizon. A case in point is a recent 8-year period, from 2008–2016: 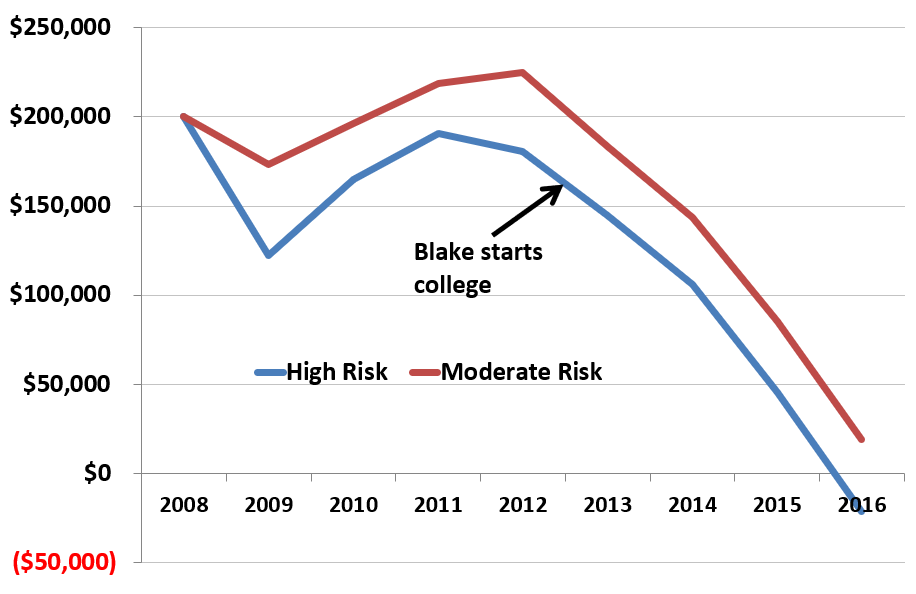 But the period 2008–2016 represents only one investment period, and a particularly challenging one, for higher risk portfolios. To get a more complete idea of whether John and Sue should opt for a high- or moderate-risk diversified portfolio, they could try running a broader stress test such as a Monte Carlo analysis. This type of analysis runs random simulations of Blake's college portfolio using hundreds of different sequences of historic returns. Some sequences of returns will produce better results (college is funded), and some will produce worse (he runs out of money). In fact, using the scenario above and investment data from 1972–2020, a Monte Carlo analysis suggests that the moderate-risk portfolio has an 85% chance of being successful (not running out of money) , whereas the high-risk portfolio only has a 77% chance of being successful, meaning 23% of the time Blake runs out of money. In this situation, a high-risk, 95% equity portfolio may actually produce a diminished chance at meeting the goal of paying for college.

In summary, most investors are familiar with the idea that you have to be prepared to accept a greater amount of risk (in the form of volatility) in order to get a chance at receiving a higher investment return. However, an important consideration in terms of how much risk to take is your time horizon. Very long commitment periods (30 years or more) may justify taking on greater amounts of risk to get a chance at a higher return. However, if the portfolio's time horizon is shorter and less certain (and 8 years could be considered short), the chance of achieving a better investment outcome might be enhanced by taking less risk.

This article is a revised and updated version of an article that appeared previously on www.crevelingandcreveling.com.

Creveling & Creveling is a private wealth advisory firm specializing in helping expatriates living in Thailand and throughout Southeast Asia build and preserve their wealth. The firm is a Registered Investment Adviser with the U.S. SEC and is licensed and regulated by the Thai SEC. Through a unique, integrated consulting approach, Creveling & Creveling is dedicated to helping clients cut through the financial intricacies of expat life, make better decisions with their money, and take the steps necessary to provide a more secure future.