When it comes to currency, there is no shortage of places for expats to hold their savings. Many offshore banks offer multicurrency accounts and market high-yielding forex or dual-currency deposits to their expat clients. Concerns regarding the viability of some currencies as well as recent government interventions can complicate the decision about which currency to hold. Since even a relatively small foreign exchange move can have a significant impact on expats' personal finances, it's important to choose wisely. In this article, we'll try to provide a framework to help make the decision about which currencies to hold easier.

When deciding where to put your money, it's important to first understand what forces move exchange rates and how what happens in the short term can be quite different from what happens over the long term.

As professional currency traders will note, unpredictable factors often drive short-term currency movements. Most important is the "ebb and flow of risk aversion," which could also be described as changes in investors' collective greed or fear. Since greed and fear are related to emotion rather than reason, short-term movements are not predictable.

Government intervention is another unpredictable short-term factor. Even when government action might be foreseen, its timing is probably not predictable.

Over the long term, exchange rates are driven by the fundamentals of the underlying economies, with the most important factor being the difference in relative price levels and inflation rates. To understand how this works, first assume free movement of goods across borders, low transaction costs, and freely trading currencies. If an item such as sports shoes has a significantly different price in one country versus another, then logically there will be more demand for the cheaper shoes. Higher demand will eventually result in either a change in the relative price (inflation of the cheap shoes or deflation of the expensive ones) or a move to equilibrium in the exchange rate between the two countries (if the currencies freely trade). Similarly, if the shoes start out identically priced in both countries but high inflation exists in one, then inflation in the price of the shoes in one country will lower relative demand for it, and equilibrium will eventually be realized through the exchange rate.

One way to look at relative currency value is to compare the size of a country's economy as measured at its official USD exchange rate [gross domestic product (GDP) at official exchange rate (OER)] versus the size of that country's economy if all goods were priced in the United States at U.S. prices [GDP at purchasing power parity (PPP)]. This comparison has some similarities to The Economist's famed Big Mac Index, except that instead of comparing the value of just a McDonald's Big Mac hamburger, PPP compares the relative price levels of the entire economy.

Neither the Big Mac Index nor PPP comparisons are perfect, so they cannot be taken as absolute predictions of future long-term exchange rates, in part because moving goods across borders comes with transaction costs and because governments do intervene in the trade of goods, services, and currencies. However, an expat whose living expenses are denominated in Thai baht may want to think carefully before "investing" in a currency that is more expensively priced, such as Australian dollars. Even a small move toward equilibrium in the exchange rate could negate a high deposit rate and then some. 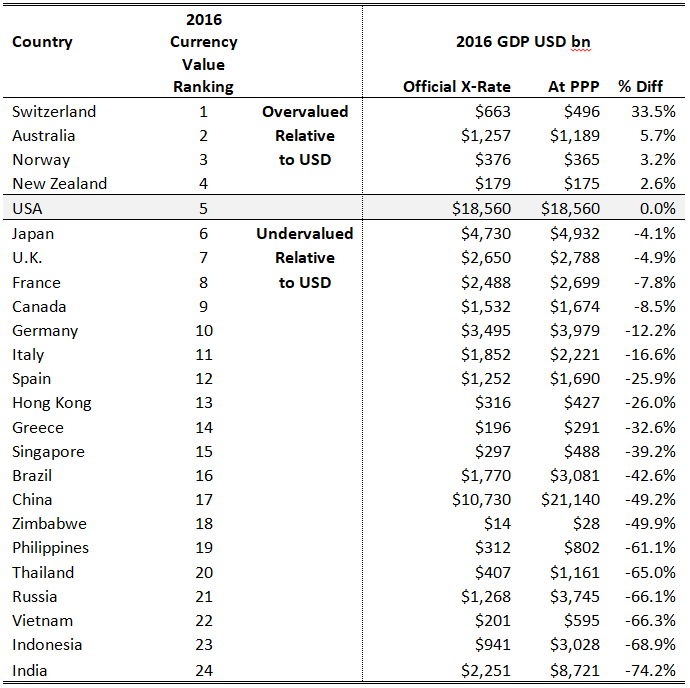 Which Currencies Should Expats Hold?

As pointed out above, short-term movements in currencies are unpredictable. And while long-term currency movements are driven by fundamentals such as inflation, the timing and the role that fundamentals play are also difficult to predict. Over the short term, taking a position in a currency is a speculative bet. Over the long term, inflation adjusted, it's a zero-sum game with high volatility along the way. Therefore, it's important to understand that currency in and of itself is not an investment like stocks or bonds, which generate cash flow and positive long-run returns.

For funding short-term goals such as emergency funds, current-year living expenses, or a known expenditure within the short-term (next few years) such as a business investment or house deposit, the best place for you as an expat to hold your savings is in a cash deposit in the currency you intend to spend it. There's no more point in putting funds you need for a business start-up on deposit in a foreign currency than there is in investing those funds in stocks―the short term volatility of either makes the risk that you won't have enough too high.

For longer-term goals, instead of trying to "invest" in a currency, a better approach is to invest in a globally diversified portfolio made up of a number of uncorrelated asset classes. Currency volatility does not have as great an impact on the long-run returns of well-diversified portfolios, as natural hedging is provided by certain asset classes, especially equity and real estate. Therefore, generally it's best to maintain diversification across most equity asset classes, industries, and geographical regions.

Hopefully, this article helps to explain what's behind currency movements and what role currency should have in expats' savings and portfolios. By coordinating the currency of your funding and spending goals, you can avoid one of the major mistakes expats make with their money and improve your overall financial security.