Expat Case Study: Is USD 2 Million Enough for an Expat To Retire At Age 40 in Bangkok?

Creveling & Creveling protects its clients’ privacy. The following is a fictitious example designed to demonstrate the type of financial decision-making required to achieve financial security and does not refer to any specific case.

From time-to-time we’re asked questions like, “Is USD 2 million enough for an expat to retire at 40 in Bangkok?” It’s a sensible question to ask—most of us aren’t likely to want to work longer than we have to, and $2 million in U.S. dollars is a sizeable amount to have set aside for retirement, especially if you’re an expat considering retiring in a relatively lowcost city such as Bangkok. But although USD 2 million is a lot, is it enough if you retire at the relatively young age of 40, with hopefully more than 40 years of retirement ahead of you? The answer is not the same for every expat. For those millionaires living overseas who are wondering if they’ve saved enough to retire, we provide some considerations to help you in your financial decision making.

Factors You Need to Consider

To know whether you’re likely to have enough to retire, you need to factor in more than simply how much money you’ve saved. You also need to ask yourself:

To run some scenarios, consider the case of Jack, a 40-year-old expat planning to retire in Thailand on USD 2 million (THB 64 million). Jack uses the following assumptions to consider if USD 2 million is enough for him to retire.

Currently, Jack’s real rate of return is negative, meaning his investment earnings are not keeping up with inflation. However, even if we assume that Jack is right—that this is a temporary situation and that over the long run he will be able to invest his savings at earn a positive real rate of return (above the inflation rate)—he is still nearly guaranteed to run out of money in retirement. Even a simple spreadsheet analysis using a Jack’s assumed long-term average annual rate of return (5.3% per year, 1.3% per year after inflation) shows this. 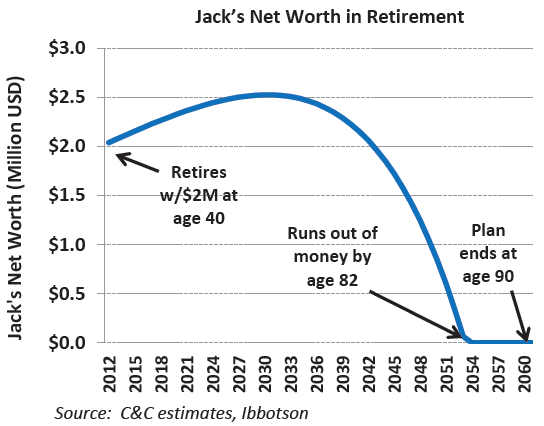 At first, Jack’s net worth rises. However, at some point in the future the growth in his annual spending will be greater in absolute terms than the growth in his investment portfolio, and his savings will be spent down quickly. Jack could be penniless by age 82.

In the above graph, note that rather deceptively in the early years, Jack’s net worth rises annually, since at first his initial after-tax portfolio earnings exceed his initial retirement spending. However, since he is also reducing his portfolio each year because of his annual spending, at some point his annual spending increases at a greater absolute amount than does his reduced portfolio (since he’s spent a portion of it). The table below illustrates the difference between the early years, the peak years, and the plummet.

As shown above, in some future year—in this case, 19 years from now—Jack’s portfolio peaks in size and then begins to plummet in value. He is penniless by age 82. In this case, this is an optimistic outcome; we’re assuming a positive real rate of return on Thai fixed deposits, which is an improvement from what is currently available in the market. Jack would be penniless faster if real rates of return remain negative for a period of time.

Improving Jack’s Chances of Not Running Out of Money

One thing Jack might do is diversify some of his savings into asset classes besides just Thai baht fixed deposits. In reality, few people are able to save enough to retire on a portfolio that is invested entirely in either cash or cash-like investments such as bank short-term fixed deposits. This is especially the case if the investment horizon (retirement period) is as long as Jack’s, who could spend 50 years or more in retirement. The expected long-term real rate (after inflation) of return of cash or fixed deposits is simply too low. The earnings, even on millions of dollars, may not be enough to cover living expenses and inflation.

Therefore, Jack could seek to increase his expected long-term real rate of return by including some higher expected return investments in his portfolio, such as global equities (stocks), real estate, and specialty bonds. If properly diversified, these asset classes can provide a hedge against inflation and thereby boost Jack’s long-term expected real rate of return. While adding these asset classes to the mix will also increase the portfolio’s short-term volatility (risk), it will increase his chances of not outliving his money. Putting up with short-term volatility is the price that must be paid in order to get a chance at earning a better long-term return. However, he may still wish to keep a reasonable portion of his savings in Thai baht fixed income.

What Else Can Jack Do?

While diversifying his portfolio will help improve Jack’s chances of not outliving his savings, it may not be enough. Even if a simple Excel spreadsheet analysis indicates that with a higher expected rate of return his savings could last for 50 years, Jack still should consider what could go wrong with his assumptions. For example, a globally diversified portfolio may not do as well as expected. His costs could be higher than anticipated for any number of reasons, including higherthan- expected inflation, currency depreciation, failing health or disaster, or even if he simply wishes to provide financial help to someone near to him. Jack might also live longer than he expects.

With a very long potential retirement period (in this case 50 years or more), planning for a number of different scenarios— including some worst case ones—only makes sense. If the numbers don’t add up, Jack could consider either reducing his spending now or perhaps working part-time for a period. In 10 or 15 years he may be very glad he did.

While USD 2 million is a lot to have saved for retirement, due to inflation it’s not as much as it used to be—even if you’re an expat seeking to retire in a relatively low-cost country such as Thailand. Going forward, inflation will continue to whittle away your spending power. This is especially the case for relatively young expats who may have many years of retirement ahead. To lessen the chance of running out of money in retirement, those seeking to retire on their savings should take into account all aspects of their financial situation, considering not only how much they have saved, but also their actual spending habits, inflation, currency risk, how they are investing their savings, and finally what could go wrong. Depending on your situation, keeping all your savings on fixed deposit may not make sense.

For more information on retirement planning, see also our previous articles, including: